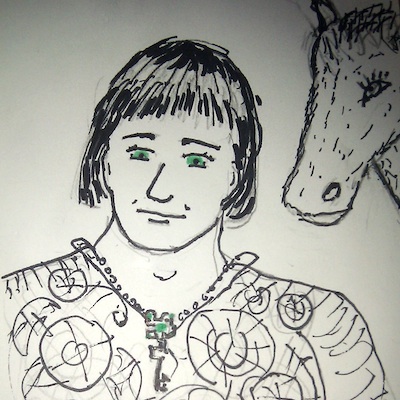 Based on a character conception and bids in an Attribute Auction run via Google Hangout by Mark Knights.

45 Minimum Attributes based on first bid

Not knowing his father or mother, not recalling his life before he became a knight defender of the Forest of Brocéliande, the Chevalier finds himself a waif in a vaster forest when he is initiated into the mighty labyrinth of the Grand Stair. Bracing his courage with his knightly ideals, with his faithful horse, his silvery armor and his singing sword, the Chevalier prepares himself for a broader stage. And yet he is attentive to the call of his sovereign Blanchemal, to whom he owes much, and more than he knows.

The Chevalier is a woodsman, a hunter, a leader of foresters; but also a captain of cavalry, a knight of courtesy and honor. He bears in his saddlebags illuminated books of chivalry, poetry, and military tactics.

Using Fate/Diaspora phases "Growing Up" and "Starting Out"

"Green-Eyed Child of Nature."
"A Knight Without the Shadow of a Name."
"Pride aspires to beauty."
"Oh brave new world, that has such people in't!"

Gringolet, the Chevalier's Mount
A warhorse of the fairy race, preternaturally strong, fierce, and intelligent.

Silver-Silk Mail
Supple and fine, worked in spiraling webs, yet tougher than leather and steel.

Chanteuse, the Chevalier's Sword
Chanteuse sings when swung through the air, and rings brightly against its foes.

The Favor of Blanchemal
A jewel wrought of silver and emerald in the shape of a key whose handle is worked with the design of a labyrinth. The Chevalier wears it on a chain around his neck. He uses it to find pure water and to remind him of his Lady.

Blanchemal La Fée, fairy, queen, and witch.
The Chevalier's sworn sovereign, a subtle and pitiless beauty and mistress of Brocéliande. She does not accompany him, but he speaks of her often.

And: http://en.wikipedia.org/wiki/Broc%C3%A9liande (the legendary forest)