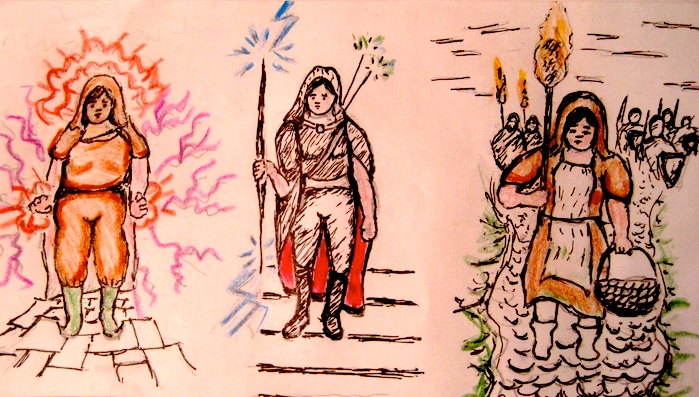 Says I, Mairi Morrigan, that's my name. As good as any, I suppose, I've been Mairi, and Marie, and Mary; Morrigan, Moira, even Miranda once, but that was long ago. Many have I been, different but the same. I wash, I cook, I push my cart, I mend, and when I cannot mend, do I watch, I wash, I bury.

Comes a young warrior up to me while I wash at the ford, and I say, Good morn to you, and he says Good morn. And I say Beyond me is whom you seek, and it pulls him up, he looks a'me, will I cry warning, but it's all one to me, and I say, Victory is beyond me, over the hill, but it will mean your life. So he sits with me and helps me wash and wring, and then up over the hill he goes. They always do, the heroes.

Few enough heroes, as many armies as I've followed. More sad, lonely, desperate young men, hardening with each step. I've felt their hearts flutter, I've felt them stop, I've held them when they're dying, or far from their darlings. A double dozen soldiers' children have I borne, the boys for soldiers, save one who was a poet, the girls run away when they can, away from me, away from the army with my blessings, save one who was a warrior.

Between wars I wash, I cook, I mend, and I wait. And there is the next war, and once I was Moira, now I am Maigret, and up with my cart and follow. Or did I once. Now I know my secret name, and why I once followed the armies. And now I follow my own path.

Stormcrow of War, Wanderer of the Stair

10 Warden of the Grand Stair

While not every Gossamer World has armies and soldiers, those which have them see Mairi as a friend to soldiers; she camps with them, travels with them, and exchanges tips and tales. She knows what and how to say to gather a rescue party, a posse, or a revengeful host.

Mairi's many years of confused wandering, of different names and faces, were an extended aftermath to her Umbra initiation.

Mairi's Umbra aftermath was finally broken by an initiation to the Grand Stair, along with a helping hand for understanding the greater world.

Lady-General Jenna Red Rose, military and civil ruler of a large kingdom, with contacts and influence across her world. Mairi's soldier daughter.

War Angel, Fury of the Stair

Mira's many years of confused wandering, of different names and faces, were deeper than mere psychic disturbance. Her sensitivity to Umbra means her personality and identity, as well as her features, wax and wane and alter slowly with its tides, though less so since her Stair awakening.

10 Warden of the Grand Stair

Mira's initiation to the Stair finally crystallized her sense of herself as more than a victim of circumstance, a follower of armies, a cook, cleaner, mender and cart-pushing pedlar. With her larger point of view, she is hungry for experience and awake to wonder and danger in a way she never was before.

Mira was called to the Stair by a Gossamer Lord who saw her walled-off potential, who showed her the wider domain of worlds upon worlds, and helped her inhabit her new self and powers.

An early acquisition on the Stair, Mira's dully gleaming armor, usually cloaked, helps her resist the attacks incumbent in battle.

Mira can throw these as spears, optionally charging them with her will to make them deadly lightning missiles, or hold one in hand and strike with keen skill.

35 Mistress of the Grand Stair

Moira's initiation into the Grand Stair as a result of crossing paths with the Underground Railroad has completely transformed her life. From a strange doom-thrall following in the footsteps of armies, Moira now finds herself general, queen and writer of her own destiny. But her journeys of the stair have taught her that though war is ever-present, it can be resisted, avoided, and healed from.

A society of Stair walkers who aid the oppressed by offering them escape to another world. The most ambitious, talented, and restless refugees become members of the Railroad themselves.

Not all refugees are war-reft civilians. Some are the remnants of broken armies. Sometimes it is worth saving them and making them into a new whole. Fiddler's Green is where Moira collects them, and where her daughter selects and trains the best.