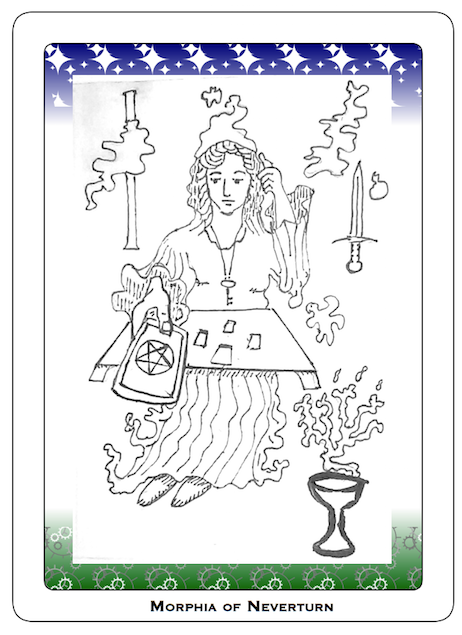 Morphia of Neverturn Depicted as her own Icon.

Prepared for the campaign Chosen of the Stair.

The weight of the Sentinel's regard rested upon her like a great pressure upon her mind, inside her mind. She gazed up at the titanic stone figure seated upon, no, carved from the mountainside.

"Greetings, child," she heard in her mind. The Sentinel looked within her and projected satisfaction. "What do you remember?"

"I am the Dawn Sentinel, guardian and keeper. You..." The thought paused, and power swirled.

A rippling curtain of light formed in the air before her, settling into an image. A young woman's face, pale, thin, even wasted, eyes of smoky gray, dark hair hanging lank, without shine. She stared, not recognizing the face until her lips parted to take a deep breath. She was looking in a mirror.

"You? Why, you are none other than the Queen of the World," came the words in her mind.

Dark hair, grey eyes, long pale face with dark brows; wearing a robe that seems blurred at the edges, or perhaps it’s a trick of the light. Passing through a Door into a Gossamer World, the robe shifts to become riding gear, armor, an explorer’s kit. While on the Stair or traveling afoot, apt to carry a metal-shod staff. Usually has the table in the corner where she can watch everyone else, trying to understand what it is to be a person among people, and so learn who she herself is in the world.

02 Mentor: The Dawn Sentinel, psychically powerful door guard on Neverturn 01 Ally: The Herald Angel Blazoneus of Skyfall, near the Agora. Proud and beautiful, never tiring of telling stories of the ancient glories of the Stair. Loves scrolls of history and genealogy and relics of ancient times. Fascinated by Icons. Morphia called on him for a perspective of what happened while she was sleeping; Blazoneus accepted her stories and several Icons (herself, fellow Angels of Skyfall, some Agora contacts) in return.

These are drawn as cards, in the style of Amber Trumps.

Morphia also has several relics of Neverturn which appear to be Icons, including a metal charm engraved with Morphia’s likeness fashioned in someone else’s art style. When tested, the metal charm worked as an Icon of Morphia, with some extra effort. She doesn’t know who made it or remember much from that time.

Heritage versus Individuation: The fate of Neverturn is on her shoulders, placed there by the Dawn Sentinel. Her people sleep; can she turn aside from her mission of waking them? But at the same time, she must make a place for herself, allies and friends and a new identity in order to get what she needs to reawaken her world.

Neverturn versus The Stair: A more particular line to walk. Morphia may turn aside from larger issues if her world’s fate is in the balance.

Commitment versus Reserve: How much to extend herself and to promise, versus how much to hold back.

The campaign set-up for Chosen of the Stair included each player writing a scene with one of the other characters, to show them connecting and interacting.

Keeper and Morphia on a boat, in a Gossamer World "If you will direct your attention over the starboard rail, you will see the high point of the cruise, there, appearing from behind the point, look!"

The broken metal shell of a great war-engine appeared, half-buried in the debris at the bottom of a coastal bluff.

"My father led the defense from the clifftop," said the guide. "It was our city's finest hour, repelling the vile invaders! I have the words from his very mouth!"

The guide launched into a colorful description of the battle.

"And, let me warn you, in case you were thinking of investigating yourself? Well, the point here is alive with unexploded munitions. Alive, I tell you! Why, we dare not steer any closer than this."

The guide indicated out a number of other points of interest on the great broken metal hulk. Then, pulling himself up short, he whirled round and gesticulated wildly at the pilot of the excursion boat.

"Captain, captain, we are too close! Steer away!"

There was a concussion that reverberated through the boat and a fountain of water off the bow. The passengers shrieked and threw their arms up. Several of them cowered in the bottom of the boat.

"Steer away, Captain, steer away!" the guide cried.

"It's a show for the visitors," Morphia said quietly. "Like a play or a story, but we're part of it. But they don't know it. I was on the ship yesterday, it all happened the same way."

"Why? Do they want to be fooled?" Keeper said.

"They want to be part of an exciting story," Morphia said. "They really wouldn't want to have been here on that day," she said, pointing to the broken war machine. "But they'd like to think they're part of it, a little bit. That they've touched danger, seen it with their own eyes." She nodded to the guide. "And he makes it happen for them."

"Then they should step on the wild side, visit their cities at dusk and daybreak, walk through hills and valleys climb and hunt and seek,” Keeper said.

Morphia laughed. “Too real, and too much trouble. They might get in an adventure. Get hurt, or late for teatime.”